Fourteen Million indigenous people have been displaced on land by conservation activities. Indigenous peoples have lived on their lands for generations and their behaviour has generally been determined by norms rather than written laws and what they have to do to survive. Protected area managers are supported (generally) by western NGOs whose behaviour is determined by economics, written laws, idealism and superficial science. Often poverty is used as a lever to “improve” the lives of primitive peoples. Brockington points out:

“One problem facing antipoverty advocates is the way that poverty is quantified. Personal income is the benchmark. It seems impossible for economists to understand that people living in the complete absence of money can be far wealthier than their neighbours in close proximity who live at the edge of the local (and global) economy. Indigenous people earning zero dollars a day, but with balanced protein-rich diets, clean water, protection from the elements, traditional medicines and strong cultures should not be placed beneath or even on a par with people earning a few dollars a week from menial labour but who have short lifespans, bad health, undernourishment, no medicines and a brutish culture”

Indigenous peoples are generally regarded with distaste in their homelands and the poor have no lawyers. Consider for example how the average UK citizen views gypsies, how Indonesians view the Bajo, the mistreatment of the Inuit in North America and the shoddy treatment of Aboriginies by Australians. Much of this is likely to do with the chasm that there is between the way in which goods are valued. Indigenous peoples, often living in small groups, survive on reciprocity and social responsibility, a value system often oiled by their close family ties.

Conservationists love the word SCIENCE. Brockington and Igoe point out that generally organisations claim this word when they are striving to acquire power and prestige and to suppress opposition. The public find it hard to question “scientific facts” and a variety of techniques are employed by conservation organisations – selective choice of facts to use, using irrelevant but impressive sounding facts, ignoring inconvenient truths and what Seth Macinko calls “Strategically benign rhetoric”.

Fishermen are a bit like indigenous folk. They live, quite literally, at the margins of society, they work irregular hours, have their own social codes, can occasionally be viewed as uncouth, do something most people don’t understand and they are viewed by many as taking something for nothing from a public resource. Most conservation organisations appear to find it convenient to ignore the fact that fisherfolk have been working the sea for hundreds or thousands of years (without adding tonnes of pesticide, fertilizer or resorting to GM crops). In passing you might like to watch a world-renowned fisheries scientist (Ray Hilborn) comparing the ecological impacts of fishing v farming. The differences between them and a landowner are:

1) they don’t have a piece of paper that says they own anything,
2) their ancestors didn’t steal land from peasants by force,
3) they are not over-represented in the house of lords,
4) you can’t do a mickey mouse degree at Oxford or Cambridge in “Marine management” because your parents come from the right social class
5) when you retire you leave with a broken body and a boat that is worth less than when you started.

Fishing has been perhaps one of the last occupations where you can succeed purely by dint of hard work and tenacity.

Recently we have seen the high profile application of pseudo-science to the world of fisheries by a cook. Would you ask a fisherman how to chop vegetables? Hugh Fearnley Whittingstall is making enormous amounts of money out of his public haranguing of the fishing industry (Fishfight isn’t a charity by the way). With his initial campaign against discards I just felt a mild irritation that someone who chops vegetables and heats meat was able to get further than many many marine scientists who have wrestled with the problem of discards for years. More recently however he has jumped on the Marine “Conservation” Zone bandwagon. Something that rich propaganda organisations such as Conservation International and Greenpeace are only too happy to support. I recommend listening to Ray Hilborn for a bit of balance in the face of this well-financed barrage of misinformation.

The fact that there is virtually no evidence to support the idea that MCZs work in temperate areas, especially over soft sediments, seems to have been completely ignored. The government and most sensible people agree that there is a complete vacuum of evidence to support the establishment of many of the proposed MCZs and some work that suggests their dominance as a paradigm in marine conservation ecology is a function of ideology rather than hard science. Simple folk like to believe that if you leave things alone things will get better and the world will return to some halcyon state – the “Erroneous equilibrium paradigm”. Real and positive conservation/resource management requires us to look more broadly than single species or drawing lines on charts. As Ostrom said, complex situations require complex solutions – there is no single solution, no magic bullet. As Beth Fulton said at the last World Fisheries Congress, “We need to tread lightly and with a broad footstep”

Excluding fisherfolk from areas that they have fished for generations in order to salve the consciences of middle-class, sandle-shod, cord-wearing pseudo-intellectual hippies is not the answer. Look at the chart here (provided by the Holderness Fishing Industry Group) and look at how much area could be off limits to fishermen. This area will be fished harder and unsustainably as the fishing industry is more and more squeezed. There is no evidence of any sort of spillover effect likely to occur in this region. Note how MCZs work around the requirements of the Energy Industry (new kids on the block) but not the unfashionable fish folk. Fisherfolk are likely to be the new conservation refugees and if the extremists get their way there will be further marginalisation, job losses and poverty in rural coastal towns and villages in the UK. The pretty ones will be sources of 2nd homes to the middle classes escaping from the city – packed in summer, tumbleweed and closed shops in the winter. The ugly ones will be left to rot. 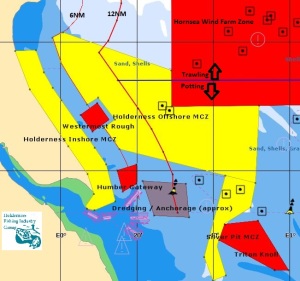 Proposed and current fishery exclusion zones off the yorkshire coast

Although my ancestors were fishermen and whalers, I am not blindly pro-fishing and I am not anti-conservationist. I’m just anti-stupidity.

Dr Magnus Johnson is a Marine Biologist and Senior Lecturer at the University of Hull. His views are his own.

Error: Twitter did not respond. Please wait a few minutes and refresh this page.