Previous attempts to characterise the visual capability of the dorsal organ of alvinocarid shrimps electrophysiologically have been confounded by both the damaging effects of submersible lights on the organ (see paper published after this one publication: Herring et al 1999) and the difficulty of carrying out even relatively simple electrophysiology at sea. It has been shown that, even in decapods from relatively shallow waters, light levels significantly greater than those normally experienced can result in the irreversible damage to decapod eyes (Loew, 1976; Meyer-Rochow, 1981; Nilsson & Lindstrom, 1983; Gaten, 1988). Here we report a successful attempt to record electroretinograms from a single specimen of R. exoculata.

In common with many other species of abyssal crustacea (Elofsson & Hallberg, 1977; Marshall, 1979), although they possess the remnants of ommatidial structure (Van Dover et al., 1989; M. Johnson pers.obs.) the eyes of R. exoculata lack dioptrics (Figure 1). As Land (1989) points out it is likely that such ‘naked retina’ type eyes are more than adequate for the perception of digital stimuli such as may be provided by the occasional bioluminescent flash and may even provide some sort of directionality. The resolution of such eyes will not approach that of the normal spherical superposition compound eyes found in decapods (Gaten & Shelton, 1993) since each individual photoreceptor will efficiently absorb light over a 24° solid angle (Land, 1989).
Figure 1: Schematic diagram of a standard shrimp eye and the dorsal organ of R. exoculata

In any eye, absolute sensitivity (probability of photon capture) is limited by the cross sectional area of photoreceptive pigment presented to the image (Goldsmith, 1990). In the usual spherical superposition eye, as found in pelagic and coastal shrimps, the attempt to form an image and the necessary geometry of the eye (Figure 1) limits the aperture and therefore the total cross sectional area of pigment presented. The absolute diameter of the eye is limited by obvious constraints imposed by the size of the shrimp and hydrodynamics. Within the superposition eye the thickness of the photoreceptor layer is limited by the diameter of the eye. If parallel light is to be guided to a few photoreceptors (for the purpose of image formation) the maximum outer diameter of the photoreceptive layer can be no more than around 1/2 that of the eye (Land, 1981).

In the naked retina type eye however , where all attempts at image formation have been abandoned, the constraints on the ‘aperture’ (effectively the whole eye to a perpendicular source) and area covered by the photoreceptive layer are much reduced. Van Dover et al (1989) found that R. exoculata had at least 2-7 times more visual pigment than is found in other marine crustacean eyes. If subjected to light from an antero-dorsal direction it is likely that almost the whole eye could be stimulated, rather than only a small group of photoreceptors as in species with the more usual compound eyes.

Van Dover et al. (1989) looked at the absorption spectrum of R. exoculata visual pigment and suggested that, although it peaks in the green part of the spectrum, it may have some sensitivity to far red (600-800 nm) light. Pelli & Chamberlain (1989) suggested that, theoretically, it may be possible for a shrimp with such a pigment to be responsive to small levels of 600 nm light generated as part of black body radiation given off by a hydrothermal plume. Van Dover et al (1989) assert that ‘the dominant physical features of the shrimps’ environment are plumes of water at 350°C’ and go on to suggest that these may serve as attractants to feeding areas.

The purpose of this report, and my participation in the BRAVEX ’94 cruise was to characterise the visual capability of the alvinocarid dorsal organ electrophysiologically.

In this study an attempt was made to get round the problem of blinding by the intense submersible lights using a novel design of light-tight shrimp trap . These were 15x15x30cm aluminium ‘lunch boxes’ with an entrance and light baffle at either end (Figure 2). The inside of the box was painted matt black to reduce internal reflection and traps were baited with partially decomposed and sterilised sardines (with tomato sauce) embedded in agar. Keeping the traps light tight meant that the size of the entrance holes was limited to 50mm. The knock on effect of this was to restrict water flow through the trap, limit the dispersal of the bait scent thereby reducing the capture efficiency of the trap. Also the limitations of basket space in the submersibles, logistical, navigational and topological considerations meant that the traps were not placed in optimal positions around the vent. From 5 deployments of various duration’s (2-10 days) at TAG (26°N, MAR) and Broken Spur (29°N, MAR) only two live juvenile R. exoculata were caught using this method (Figure 3). Attempts were also made to elicit responses from animals that had been captured in more conventional ways (i.e. where no attempt had been made to protect them from excess light).

The animals were transferred from the trap to chilled seawater as quickly as possible and, apart from a very brief exposure to ambient laboratory light (finding and gently handling very small prawns in the dark is almost impossible!), handled under dim red light. They were dried and securely attached by the carapace with super glue to a mount on a micro-manipulator. Preparations were held in a small chamber of cool sea water so that the gills were submerged but the dorsal organ and anterior portion of the body was kept out of the water. Electrical and high frequency mechanical interference were reduced by locating the set-up in a portable Faraday cage supported on three wheel-chair inner tubes.

Light was generated by a 75w xenon arc lamp (Oriel inc, Model 6000) and directed to the preparation via a quartz light guide after passing through a selected narrow pass band filter and neutral density wedge. Stimuli, at ten wavelengths, consisted of 0.1s bursts of isoquantal light (1.2 x 1020 photons m-2s-1) controlled by a programmable shutter supply connected to an Ealing Electronic Shutter (Model No. 22 8411). Responses were recorded via a simple platinum electrode coated in nail varnish as far as the tip (Outdoor Girl, No. 39 [Marshmallow], Max Factor) held in a Neurolog pre-amplifier headstage (NL 102G). This was mounted on a micro-manipulator and connected to a DC coupled pre-amplifier (NL 102) and AC-DC amplifier (NL 106). A small hole was made in the carapace and only the very tip of the electrode inserted into it. Responses and stimuli were recorded on a Macintosh classic II microcomputer via a MacLab/4. Preparations were sequentially subjected to stimuli of between 360-599 nm. In addition an attempt was made to elicit a response to a hand-held tungsten lamp filtered by a 600 nm wratten gel cut-on filter ( 1.8 x 1020 photons m-2s-1).

No response to light was found from any of the animals captured in conventional traps. Of the two juveniles captured in the light-tight shrimp trap, one died shortly after reaching the surface. Responses were successfully elicited from the other. The animal was tested at 10 wavelengths ranging from 350-600 nm and three experimental runs were obtained from this animal. The runs were fairly consistent each giving a response maximum at 500 nm (Figure 4). Between 350-600 nm the electrophysiological response properties of the eye are very similar to the absorption spectrum data of the visual pigment previously determined by Van Dover (1989). However when a red light from a hand held lamp was directed at the eye no response was recorded. 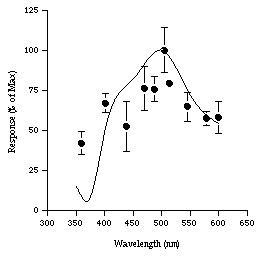 In determining the spectral responses of a light sensitive organ, the ideal method involves obtaining a spectral sensitivity curve. This is especially true when there are several visual pigments. However, such a determination requires a V/Log I curve, preferably at each wavelength. In this case that was not possible because of the fragility of the specimen. A spectral efficiency curve which uses isoquantal flashes at each wavelength provides an alternative way of examining the spectral responses and is acceptable as long as there is a single visual pigment. This appears to be the case with R. exoculata.

The response pattern generated from a single juvenile specimen of R. exoculata appears to agree with the findings of Van Dover et al. (1989) and suggests that the dorsal organ has maximal sensitivity at around 500 nm. The lack of electrophysiological response of conventionally caught (i.e. not light protected) shrimp to light, and histological evidence (E.Gaten, pers.com.), would appear to confirm that the dorsal organ is susceptible to irreversible damage following exposure to intense lights from the submersible.

Why the animals have a peak sensitivity at around 500 nm is not clear. Aside from black body radiation, other potential sources of light include crystalloluminescence, luminescence associated with ionizing radiation, chemiluminescence, sonoluminescence and bioluminescence (LITE Workshop Participants, 1993). Many of these sources, particularly bioluminesence (Nicol, 1978), can have emission spectra congruent with the absorption spectrum of R. exoculata. The visual pigment characteristics of this species do not appear to differ markedly from those of other deep-sea species (Nicol, 1978; Frank & Case, 1988; M. Johnson, unpublished data). This is unlikely to be because of physiological or biochemical limitations, many species have evolved photopigments light of wavelengths longer than 500nm (Bowmaker, 1990; Cronin et al., 1993).

The idea that the organ may help the shrimp to locate active vents originates from suggestions that hydrothermal ‘plumes’ were at 350°C and that these could be perceived by a photopigment with a lmax of around 500 nm or more (Van Dover et al., 1989; Pelli & Chamberlain; 1989). However recent data suggest that 1 m above the vent orifice only about 2% of the plume is actually pure vent fluid, the rest is entrained sea water (R. James, pers. com.; Chin et al., 1994). Temperatures of 350°C could only be found within and in the immediate vicinity of the orifice. The shrimps don’t seem to be attracted to the actual plumes, rather they appear to congregate on the walls of active structures and in diffuse flow areas (M. Johnson, pers. obs.; Segonzac et al., 1994) where the temperature may range from 4-40°C (A. Schultz, pers. com.). It seems unlikely that a heat sensitive dorsal organ would be useful for the location of a such areas. Generally the reflective tapeta of shrimp eyes can be used to infer the likely direction from which stimuli of interest originate (Johnson et al., in prep.; Shelton et al., 1991). In the case of R. exoculata this would appear to be from above. Many other non-hydrothermal species of crustacea possess pseudosuperposition or ‘naked retina’ type eyes and generally they point in an antero-dorsal direction (Eloffson & Hallberg, 1977; Marshall, 1979; Land, 1989). It would seem most likely that the dorsal organ of R. exoculata is adapted for the perception of light dorsal to the shrimp of around 500 nm.

Physiological, behavioural and anatomical evidence suggests that many bentho-pelagic species are very sensitive to currents and chemical scent trails. It is thought that deep-sea fish and invertebrates swim across the prevailing current until they encounter a scent trail, they then swim upstream towards the source (Marshall, 1979; Gage & Tyler,1991). If fish and scavenging amphipods can locate small prey items by scent alone, how much easier would it be to locate a hydrothermal vent site?

Many thanks to Mr D. Jones for manufacturing the ‘light-tight-shrimp-traps’ at short notice. Also to the officers and crew of the Akademic Mstislav Keldysh, Dr E. Gaten, Rachel James, Dr C. Van Dover, Dr Cherry Walker, Dr M. Segonzac, and the BRAVEX ’94 scientific team. M.L. Johnson was supported by a NERC/CASE studentship (No. GT4/92/5/A).

GATEN, E., 1988. Light induced damage to the dioptric apparatus of Nephrops norvegicus (L.) and the quantitative assessment of the damage. Mar.Behav.Physiol., 13, 169- 183.